For this interview, we’ve really opened the box. Pandora Spocks identifies herself as a writer of literary erotica. Otherwise known as a purveyor of the sexy books. Pandora chooses to write then as a work of love. She writes the books she wants to read, she says, and loves a happily ever after almost as much as I do (of course, no one loves them MORE than I do}. When asked about her inspiration, she answered, “I’m inspired by great little nuggets of stories that I can wrap a whole book around.” 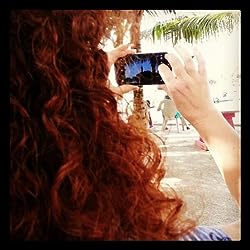 Her first offering to the world was Luke and Bella: Two streets over. It began as a little blog project and grew from there in a very Fifty Shades kind of way.

Initially, I posted this story chapter by chapter on my WordPress blog, Luke & Bella. As I gained readers, I began to consider the possibility of publishing the whole thing as a novel.

The book took Pandora into somewhat uncharted territory. Authors are often heard complaining that stories take on a life of their own, and Spocks is apparently no exception.

Luke & Bella:Two Streets Over is about a television journalist and a photographer thrown together to produce a new weekly travel program. Against a backdrop of exciting and adventurous locales, they begin to fall in love, but Luke realizes that he hasn’t been completely open with Bella about his lifestyle. Should he remain content with the status quo? Or should he be honest? There’s the the chance that she’d be open to taking their relationship to the next level. On the other hand, he could lose her forever. When I first began writing Luke & Bella, I had no intention of taking the story in the direction of BDSM. As the chapters came along, the story just sort of went there.

Spocks has holiday plans with a December release of a brand new series. Rannigan’s Redemption is a slick contemporary erotica three-parter in pre-order right now. She blogs on wordpress, and makes daily appearances on Facebook and Twitter at @PandoraSpocksWP.

2 thoughts on “An interview with Pandora Spocks”

This site uses Akismet to reduce spam. Learn how your comment data is processed.